Where is the baby?

The Couple Next Door by Shari Lapena

In case you have never heard of the author:

Lapena is a multi-novel thriller writer. She resides in Toronto, Canada. She has been on the NYT bestseller list, as well as the UK Sunday Times bestseller list.

In case you have never heard of the book:

Anne and Marco are the ideal couple, with a new baby. They are typical parents: tired, paranoid, and in need of some time as adults. They accept an invitation to dinner next door, and check on the baby religiously.

When something happens to the baby-the parents are the first on the list of suspects. The detective digs in, finding secrets well buried, and uncovering the truth about the ideal couple.

In case you wondered what I thought:

This book was bland. While it was easy enough to follow, the details were lacking and it just felt like someone gossiping about someone else. It was slow, simply because it was a little tiresome…BUT, I DID want to find out what happened to the baby and how everyone was linked in the end.

Overall, may recommend. May not. Depends on the mood of the reader asking.

In case you have never heard of the author:

Smy went to Cambridge School of Art, where she learned to become an illustrator. She has drawn for several well-known artists, and now has published for herself.

In case you have never heard of the book:

This book is a black and white combination of images and writing that occur on separate time lines, but meet up near the end. It involves three little girls, a house, and an orphanage.

In case you wondered what I thought:

Sort of a ghost story, sort of a thriller-based lesson in empathy, this book was a wonderful example of what can happen when something (or someone) is neglected. The differing story-lines were difficult at first, but then, once I caught the different voices in the images compared to the diary entries-I was able to differentiate. The illustrations are gorgeous and full of details, while the diary entries are intriguing.

Overall, while this book is super easy to read-it took me a while, because I was so drawn into the images. It is dark, and can be scary for smaller readers, but appropriate for pre-teens and up (IMO). This book could be “unpacked” and really review its under-lying meanings to determine more hidden themes and ideas.

I enjoyed it and would recommend.

A bit of a question…

The Night In Question by Nic Joseph

In case you have never heard of the author:
Nic Joseph is a thriller/suspense novelist, writing in Chicago. Joseph attended Northwestern University and loves solving a good crime.

In case you have never heard of the book:
Paula works overtime to try to earn a little extra money by driving. When she picks up her last fare of the evening, she finds he left something behind…something that can earn her a lot of money-and cause him a lot of problems. A woman is killed in the same building she dropped her fare-and she is the only witness. She has to figure out what happened, and fast!

In case you were wondering what I thought:
The book was written as a suspense, and there were shady moments. I enjoyed it, but it was easy to predict what was going to happen next. The characters weren’t fully developed, and the sensory information could have been more involved. Overall the book was easy to read, quick, and not as scary as I would have liked. In my opinion, I would only recommend this book if someone needed a quick read.

Lie To Me By JT Ellison

In case you have never heard of the author:
She is a thriller/psych-drama novelist, who has won several awards. She also co-hosts an Emmy award-winning tv show.

In case you have never heard of the book:
In this drama, Sutton and her husband, Ethan, are both award winning authors. They have been married a while, and have a kid together. But this life, which looks picture-perfect from the outside, is far from that.

When the baby dies, and later, Sutton goes missing, the investigators will dive into the unlikely past and possibilities of what if.

A story of he said, she said…what really happened to Sutton?

In case you wondered what I thought:
It was definitely suspenseful. It was dramatic. There were unseen twists and turns. The ending was not exactly how I had guessed it would be-and was fun to read through!

The language flowed, the story line kept me intrigued, and it was interesting.

Are you a Good Girl?

In case you have never heard of the author:
She is into history and American Lit, and lives in Chicago. She has written two other best-sellers.

In case you have never heard of the book:
This thriller describes the life of Mia, before and after. Mia is a young woman, out to meet her boyfriend. When he doesn’t show, she leaves with a handsome stranger. That is when the trouble starts.

In case you wondered what I thought:
Mia, an independent twenty-something with loose ties to her family, goes missing.

Eve, Mia’s troubled mother, feels guilty about her missing daughter, and regret at her missed opportunities.

James, Mia’s father, a well-known judge and hard-ass, believes that Mia is out being irresponsible-not missing at all.

Colin, the kidnapper with a checkered past, and conscience, has a warm heart and opens up when he finds himself falling for his charge.

Gabe, the detective with an eye for Eve, and a priority to solve Mia’s case, sets out to make sure there is closure.

This book weaves a fine tale, but switches narrators and time-so you have to keep up. The full plan only reveals itself at the end-so stay invested.

A Little Rock and Roll…

In case you have never heard of the author:
She is a self-described degree holding millennial. She is an award winning romance author. She is based outside Toronto, Canada.

In case you have never heard of these stories:
A little smut never killed anyone, right? Right?

Jax Jamison is a rock star. Haley is a computer nerd, with a penchant for music…and Jax.
The first story is how they met, the second is how they reconnected, and the third is about their future together.

In case you were wondering what I thought:
These are a fun, easy read to be enjoyed by Kindle or e-reader, preferably all in one shot. They are quick, and the vocabulary is not difficult to digest.

In case you have never heard of the book:
This is a follow up to the All Souls Trilogy, dealing with Matthew and Diana and their family.
Matthew’s son, Marcus, has memories that go back a long time. As a vampire, he is constantly fighting with his past lives. In this book, we learn more about him and where he came from.

In case you have never heard of the author:
She has written the three books that are now a tv show in its second season on AMC. She is an historian, living in Pennsylvania. She is an award-winning novelist.

In case you were wondering what I thought of the book:
This book took a bit longer to read because of the extreme detail in historical fact. It was a fun forward movement from the last three. It was a smart read, with strong characters, wonderful history, and colorful detail.

I would recommend this book, but ONLY after reading the first three. 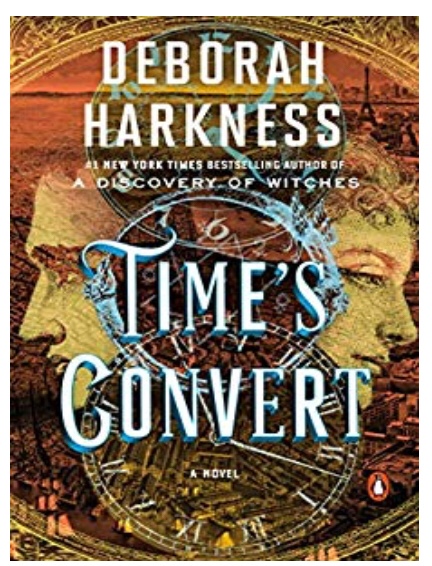 The All Souls Trilogy is a three book series in the Fiction/ Science Fiction genre, by Deborah Harkness.

If you have never heard of the author:

She is a Professor of History at USC. She has written several books about historical subjects, and has received several prominent awards in historical circles.

If you have never heard of the books:

They are a series of books chronicalling the adventures of Diana Bishop, a witch, and Matthew de Clairmont, a vampire, and their love affair. The series uncovers the biological link between vampire, witch, daemon, and human.

The first book details the meeting of Diana and Matthew, and the beginning of their adventure.

The second book reviews their leap into the unknown, and the beginning of the understanding of what they are.

The third book wraps up the series with a fight for their lives, for their family, and for the book and enclosed information that they had fought so hard to retrieve.

A little bit of love, a little sadness, a little comedy, some other-worldly beings….all lend themselves to a riveting, fully consuming set of books. I fell in love with the characters-all of them. They were beautifully written-especially with all their flaws. I was heartbroken, full of hope, exasperated, and anxious at the outcome for all the characters.

If you are looking for a book to totally withdraw into, this would be that book!

In case you have never heard of the author:
Sandie Jones is a freelance author, whose breakout novel was The Other Woman (see review below). She lives in London with her family.

In case you have never heard of the book:
Well, it is an ARC, so I don’t suppose you have as of yet.
The First Mistake addresses the choices you have to make as a wife, a mother, a widow, a business owner, a friend, and an individual. It also discusses the consequences of those choices.

Alice is a mess. She is an interior designer, with a past. But her two kids, her second husband, and her best friend all support her. So, then, what is the problem? Who can she trust? Is her husband cheating? Is her best friend working against her? Is she in danger of falling back into the depression that almost consumed her after her first husband died?
What do you do when your whole life appears to be falling down around you? In Alice’s case, she decides to take her life back.

What did I think of the book:
Okay. So. I have thought about what to say. I don’t want to dissuade anyone from reading this. It is interesting, and suspenseful. I did enjoy it overall. But, in my case, it was very predictable. Except for a few minor details, I predicted the second and third sections in the book pretty accurately. I enjoyed it, but was a little disappointed at the ease with which I was able to determine who was whom and what was what. So, just be aware of that possibility. 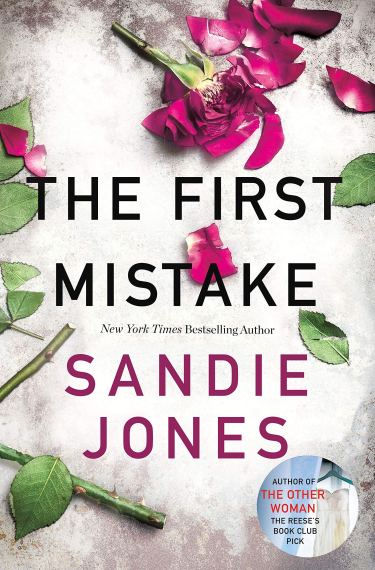 If you decide to read it, let me know what you think!!

A novella, by King, exploring the intricate relations of a conservative town and a few open minds; the heaviness of ignorance; and the weightlessness that comes with acceptance.

A man discovers that he is losing weight, but his body isn’t changing shape. He is more than losing weight-he is becoming weightless.

In his journey, he manages to befriend a lesbian couple, a older, conservative, republican, White woman, and her much more liberal husband-the Doctor.

With all the things happening in this world, in his small town, how can he make something better?

How does hate, ignorance, or lack of love weigh on you? 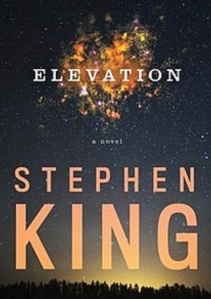 Did you read this? What did you think of the political implications? Let me know.