I have completed reading Oscar Wilde’s The Picture of Dorian Gray.

In case you have never read it:
A young man sits for his portrait, in which he sees all the beauty that resides in him and makes a wish that all the beauty of the portrait should stay with him forever while all the evidence of his sins should be made clear on the painting. When his wish actually comes true, the painting becomes a horrific display of sin and debauchery.

In case you don’t know anything about Oscar Wilde:
“Oscar Fingal O’Flahertie Wills Wilde (16 October 1854 – 30 November 1900) was a prolific Irish writer who wrote plays, fiction, essays, and poetry. After writing in different forms throughout the 1880s, he became one of London’s most popular playwrights in the early 1890s. He is best remembered for his epigrams and plays, the novel The Picture of Dorian Gray, as well as the circumstances of his imprisonment and early death.” (wikipedia) He was incarcerated for being gay, and having relations with men. When he was released from prison, he moved to France, where he lived out his life, poor and alone.

My opinion on the classic:
Where to start? If I had not known about his sexual preferences, I could probably have drawn conclusions from the relationships between the males in the story: it was intense and sometimes flirtatious. The relationships between the male and female in love: lackluster, boring, and excessive. The language was dizzying in amount. The majority of the language was conversation. The sentences were long, and took up several lines. It was old language, originating in the 1800’s, so a few words were unfamiliar, and required a google search. I am familiar with the Bronte sisters and Austen, but even they could not compete, language wise. Overall, the story  had a really deep background, with a base verging on the surreal.

Years later, Ivan Albright painted the actual portrait, for the movie. It is disturbing, and gorgeous, and frightening. The painting adds a life to the story that wasn’t there before, in my opinion. It pulls the series of decisions by the main character out of the imagination, and into the real-fleshing out the sins, so to speak.

If you have any further opinions on the book, or want to start a conversation about what you are reading now, hit me up. 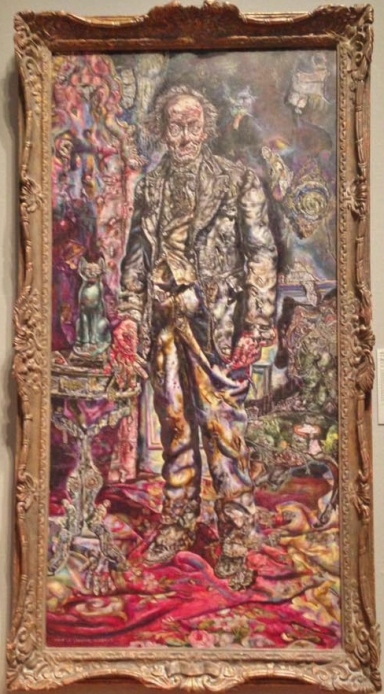 “Beauty that pleases the eye is a frail, fleeting illusion. But that beauty capable of pleasing the heart can endure endlessly.”
Author: Richelle E. Goodrich